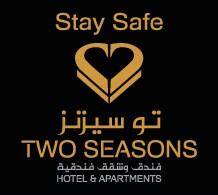 For most children, the first day of school is an exciting time complete with new clothes and back-to-school gear. But for kids in families where money is tight, the experience can be just opposite.

Dar Al Ber is considered one of the first charities in UAE. It was established in Dubai in 1979 as a charity, cultural & social firm. Dar Al Ber Board of Directors has been formed according to the directives and decisions of His Highness, Sheikh Mohammed Bin Rashid Al Maktoum, UAE Vice President, Prime Minister and Ruler of Dubai.

“Supporting the students and communities where our hotels operate is an important element of who we are as a brand, that’s why we have partnered with a number of charities to support our goal of changing lives. We believe that every child should have the opportunity to go to school with dignity and hope” said Freddy Farid, Managing Director of Two Seasons Hotel Management LLC.

“We hope that this small act will help them put a smile on their faces knowing that someone cares. Our aim is to continue to strengthen our commitment and solidarity to the local community through such activities. The hotel is keen to implement community initiatives on a regular basis. It has already launched a campaign with the participation of hotel staff to clean up major streets in Dubai and organize ceremonies for orphans as well as blood donation initiatives,” he said. The Director of Human Resources, Mr. Mohamed Abbas represented Mr. Freddy Farid in handing over the school bags to Dar Al Ber Society team.

The property have a long culture and tradition of Corporate Social Responsibility (CSR) especially in terms of voluntary engagements in the region. They have been making several important contributions over the years to the environmental and social development of the country. Corporate social responsibility is a commitment to improve community well-being through discretionary business practices and contributions of corporate resources.